Today will be the last day of stories – tomorrows post will be a collage of various photos that represent Birdline.

This last story I saved till the end.  This bird encompasses “everything” you have read thus far in the posts.  Breeders, kijiji sales, physical and psychological abuse, neglect and being unwanted.

His name is “Winston” and he is the very reason that Birdline exists today – his journey has been a very long one and has not ended yet – he is by far the most socially traumatized African Grey we have ever  had come through these doors, and he may never be what you term “your normal grey”, but he is so very loved, wanted and is a huge part of our life.  His story involves another key person – and although we have never met from across the pond, this man – known as CQ (Oliver)also does rescue with African Greys in the UK, his daily support, guidance and love for this bird hes never met will always be treasured. 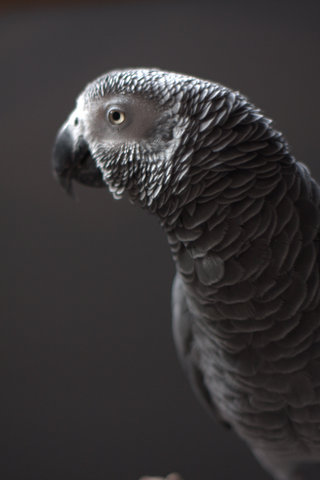 When we met this bird for the first time he was in a chinchilla cage – sitting on a perch with a rope dog toy and a few bowls of seed and tons of peanut shells.  He had a large wound to his chest and no flight feathers and his tail feathers were all broken and he was terrified!  It was later found that he was purchased from a petstore by a fellow breeder who sold her stock to this store, and decided to trade her stock for this bird.  As he was fully flighted, she didn’t want him bothering her flock so she clipped him, but it took over an hour of chasing him throughout the house to catch him in a towel – this began the phobias he still possess today.  After capture, his wings were clipped – follow the contour shape of a birds wing – not only the primaries cut off, but some of the secondaries as well.  As a result of this blunt cut, he could not even flutter but fell like a rock – which is how he obtained the injury to his keel. 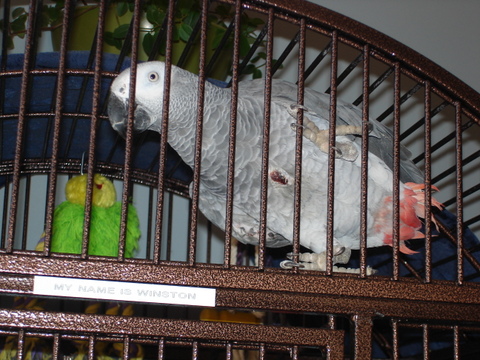 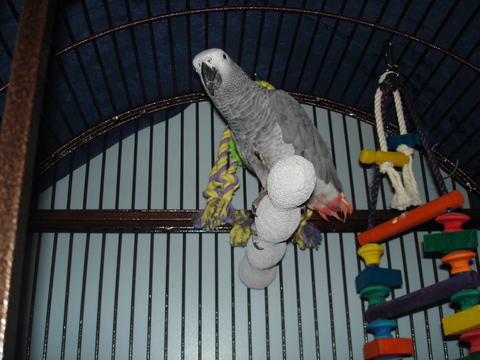 The continued falling in his cage also caused further damage to the wings.  Because they had been clipped so short, whenever he fell the stubby pieces poking through kept getting pushed back into the wing – the underside of the wings was a bloody/scabby/swollen mess.  It took 2 years before any primaries actually started growing out!

Winstons story is very long so I will try to shorten it the best I can.  This bird was subjected to extreme verbal abuses – this was confirmed when he eventually started talking and repeating certain phrases over and over again – one of the most heartbreaking things I think I have ever heard.  As he became fearful after his wing clip, the residents in the home were unable to walk anywhere near him without him starting to growl/scream in terror – this brought objects being hit against the cage – objects thrown at the cage which included handfuls of seed, ashtrays and whatever was handy.  This only escalated his behaviors.  When he first got here he was terrified of everything, including his cage – and would often jump off of it only to land very hard – we placed tons of blankets around it to provide a soft landing. 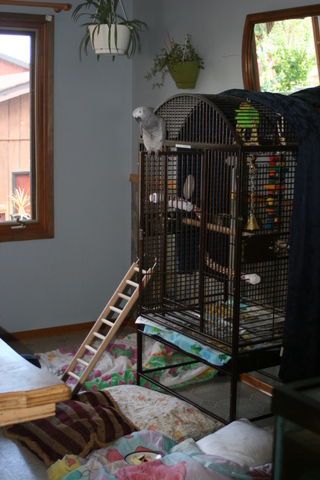 After the course of a few weeks it became clear that he saw this cage as a bad thing – he would have night frights which hurt him even further, and couldn’t settle down.  We built him a play stand – low to the ground – which he eventually took to and spent almost 2 years there – seriously – he lived on this stand and only went into a small sleep cage at night.  We scaled down the size of the cage and eventually increased the size over the course of a few years. 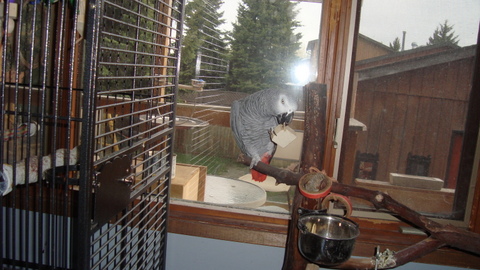 And through all of this, we had to gain his trust.  This was a daily struggle and at times he still has moments when he backs away.  He was never treated in a positive, social way, and never interacted with people the way most greys do in captivity – its not a behavior hes learned and hes comfortable not being a snuggly/cuddly bird and we’re okay with that.  His diet was also something we had to work on very hard – there was alot of eating foods in front of him and playing with toys to show him its OK – he was terrified of everything from wood blocks to apples and everything in between.  He chewed the branches on his playstand long before he learned that toys were okay. 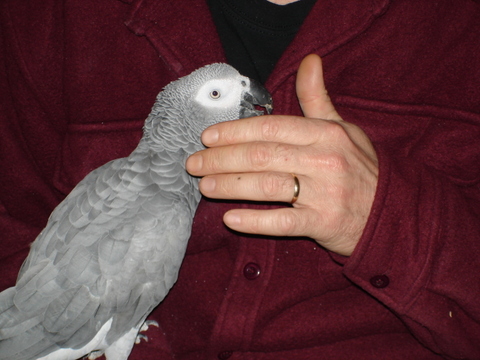 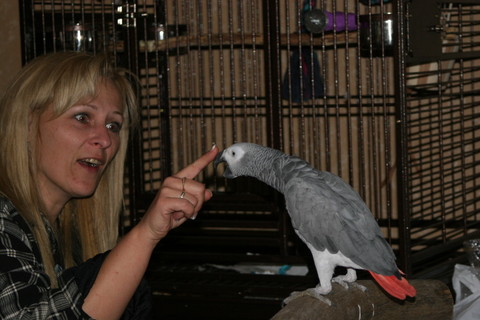 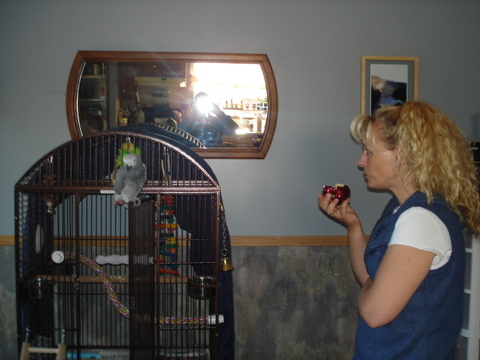 He never learned to step up directly onto hands, to this day hes nervous of them.  We constructed a stand that was small enough to be portable so that we could encourage him to have time away from his stand and cage and interact with us one on one – he still uses this stand from time to time and we have found it useful for other birds in similar situations. 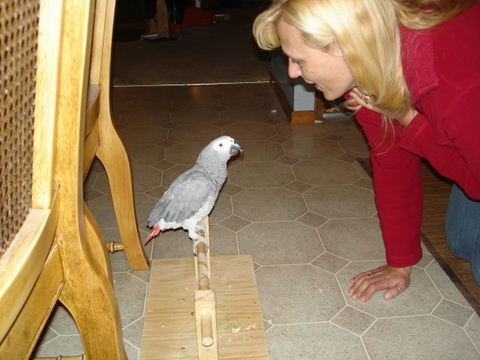 Eventually, this brave boy learned to fly – and oh the kerfuffles he had!! He had NO sense of direction and often flew into whatever happened to be in front of him, including people.  Over the course of many months, he finally figured it out and was able to get around corners – while his landings were not the best – he gained so much confidence!  The first time he made a perfect landing – it was on the top of the cupboard.  I can’t tell you how proud we were of this huge milestone he finally made – and even though he proceeded to chew the hell out of the door, those beak marks were a testament to how far he had come – and its only wood 🙂 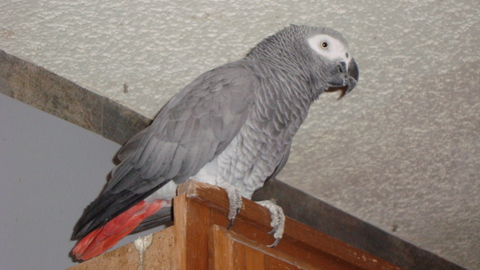 Winston is the embodiment of Birdline.  He has gone through every trauma and circumstance we have ever encountered. Winston is the reason Birdline exists. When we needed help, help was hard to find, or thousands of miles away. Winston showed us that yes, parrots are abused. Yes, parrots need rescue. Yes, parrots are neglected. Forgotten. Pushed aside. Starved. Beaten. We find this so hard to understand. Parrots are intelligent, emotional, beautiful, fascinating, complicated… when we bring them into our homes, they should not be ‘Pets’, rather they should become our ‘Companions’. We need to strive for our relationships with them. We should seek to meet their needs, without regard to reward from them. The rewards at the end of the day make it all worthwhile.

Please consider making a rescue parrot your companion. They need you!

March 15, 2014 – Winston died in a tragic house fire at Birdline along with 26 other companions.  We miss him more than words can say and hold tight to the memories.

“Till we meet again – see ya later, be good” 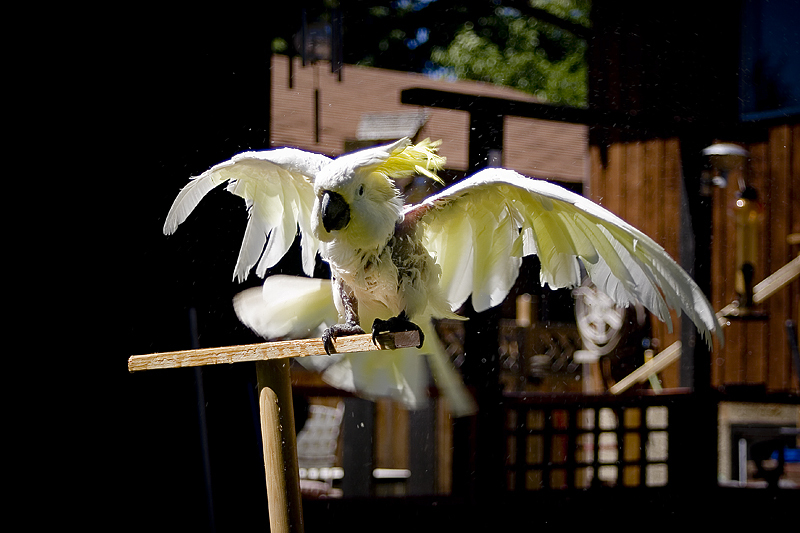